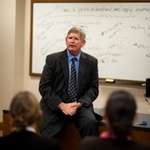 Dirk Jordan is a graduate of the University of Texas School of Law.  He practiced for 10 years at the Austin office of Strasburger & Price before opening his own firm in 2001.  He practices commercial litigation with an emphasis on construction litigation.

He has been a member of the Calvert Inn of Court (1991-2009) before helping to start the Lloyd Lockridge Inn of Court (2009-present).  He was elected to the Board of the American Inns of Court in 2014 and recently elected to the Executive Committee of that Board.  He has served on the Area 9 Grievance Committee for the State Bar of Texas for two terms serving as chair for one term and has been on the Law Practice Management Committee of the State Bar since 2012, serving as chair for two terms.  He served on the board of the Litigation Section of the Austin Bar Association for one term.  He was awarded the Larry York Mentoring Award by the Austin Bar in 2017.

Dirk is an active proponent of the Texas Wine Industry, serving on the Board of Advisors for William Chris Vineyards located in Hye Texas.

His hobbies include working on his ranch, learning about wine, and cheering on his LSU Tigers.

Thank you for contacting us. We will get back to you shortly.

Please complete all required fields below.

Jordan Law Firm is committed to answering your questions about commercial litigation, construction litigation, general counsel, mediation, and winery/distillery representation law issues in Austin and in the Texas Hill Country.

I’ll gladly discuss your case with you at your convenience. Contact me today to schedule an appointment.